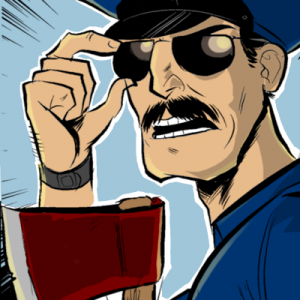 It all started with two brothers messing around one day; they came up with idea of a cop who fights crime, with, you guessed it it, his axe.

Oh, sorry, I should also mention; the two brothers are called Ethan and Malachai Nicolle. Ethan was twenty-nine when all this started, and Malachai was just FIVE years old.

Now right away that might lead to you have some misgivings about the quality of this on-line comic (www.axecop.com).
Forget em.
Axe Cop is one of the greatest things I have ever been introduced to.
(Thanks to a mean bearded old man with whom I work. Reluctantly.)

Malachai has one of the most vivid imaginations I’ve ever come across, and Ethan skillfully crafts that outpouring of creativity into one of the funniest things I’ve ever read.
I will write a full blown review of Axe Cop soon, but until then you can check out the comic on-line, and feast your eyes on my interview with the excellent Ethan Nicolle, artist of Axe Cop…

Kate West: Your website says that you have no formal training as an artist, and you mentioned in one of
your video posts that you were Malachai’s age when you started drawing; have you always
wanted to draw comics? Do you think of particular comic or artist when you think of what
inspired you to draw?

Ethan Nicolle:  I don’t remember starting drawing.  I know I was doing it at about the time I was learning to talk because my mom has cassette recordings of her drawing with me and you can hear her saying “circle” then baby me tries to say circle as she holds my hand and draws a circle on a small chalkboard.  She tells me it didn’t take long for me to start drawing everything myself.  She says I just lit up when I discovered that illustration was possible and it has been something that has fascinated me my entire life.  I did not go to art school but in full disclosure I did do two terms at my local community college as an art major then I quit.  I don’t count that much toward what formed me as an artist because it was mostly a lot of the teacher just having us sit there and do art while she sat in her office, which is what I would have been doing anyway.  I did ask professionals constantly what I needed (to) work on and I sought out to work on those things… anatomy, perspective, layout, design, etc.  I always wanted to go to art school because I do think that if I had gone to a good one I would be a tighter artist today, but I only wanted to go to a really good school, yet I did not want to go into debt for it, so in the mean time I just tried to teach myself as best I could.  Before I managed to pull off art school my art took over my life on its own.

KW: You obviously have a great relationship with Malachai; do you think he’s been influenced by
you in that he might wanna carry on in the comics business as an adult?

EN: I don’t know how it will affect him in the future, but right now Axe Cop is much more of an activity we do when I visit rather than a profession to him.  I don’t think his career goals are big on his mind, and I am totally fine with that.  If I had to guess, I see him doing something much more technical when he gets older, but who knows what will happen.  Before Axe Cop Malachai didn’t read comics.  It wasn’t until Dark Horse started giving him free comics to read after we had gotten a publishing deal with them that he even started to crack them open altogether… and there are so few comics that are appropriate for him to read that it was never a world I planned on involving him in until maybe when he got older.  I never would have imagined we would be sitting at conventions signing books together.

KW: Do you have plans for any other series coming up? Or is Axe Cop still your main focus?

EN: Axe Cop is my main focus for sure, but I have never been a one project guy.  I have a lot of other stuff in me I need to get out and I have tried my best to do it while staying on top of Axe Cop, which is a lot of work.  In about a year and a half of Axe Cop we have produced enough material for three trade paperbacks.  On the side I still work on pitch ideas for animated TV shows when I can.  I also have recently taken a more bold step and started a second web comic that is written and drawn by me and colored by the talented Noah Maas.  It’s called Bearmageddon.  It only started a couple weeks ago and I can only put out two pages a week while I am putting out three a week of Axe Cop but I am very proud of it so far and it has had a great response.  If anyone would like to check it out they can visit www.bearmageddon.com

KW: If there ever was an Axe Cop movie, who would you like to play Axe Cop?

EN: I get this question a lot and I never have a real good answer.  That’s because when I look at Axe Cop I don’t see a celebrity… I see Axe Cop.  He is definitely a Burt Reynolds or Tom Selleck archetype, but I would not necessarily want him played by either of them.  I would rather let the surrounding characters be celebrity cameos and have Axe Cop himself be an unknown who is good at being dead serious, is buff, has a nice square jaw and can pull off a great moustache.

KW:  Are there any other comics, online or in print that you would recommend to your fans?

EN: Yes, for web comics definitely Dr. McNinja and Ratfist.  Both great comics made by good friends of mine.  Ratfist actually finished posting recently but I believe you can still read it.  I also really dig REmind by Jason Brubaker.  Some of my favorite print comics are the Goon, Walking Dead, just about any Doug TenNapel graphic novel and I have been digging the Invincble and Chew a bit too.  I also really love art books and one my all time favorites is the Daily Zoo by Chris Ayers.  I actually have started a ritual called “RecomMonday” on the Axe Cop Blog where I post a new thing I love and recommend every Monday and talked about the Daily Zoo last week if people want to know more.

KW:  Who is your favourite Axe Cop character?

EN: I assume you mean besides Axe Cop.  I have a lot of love for Baby Man and Sockarang.  I thought Malachai really loved the Moon Warriors until he killed them with a bear god.

KW: Ralph Wrinkles, Presty the pug, Army Chihuahua; Malachai seems to like dogs, does he have
one? And if so what kind?

EN: Yes, the family dog’s name is Rofie and it is some kind of mix they got from an animal shelter.  Definitely some terrier in it… not really sure what the heck it is really, but Rofie is a very sweet, calm dog.  Presty is named after Preston, a Pug that lives next door and yaps through the fence anytime we enter the back yard.  Ralph Wrinkles is based on a stuffed dog I got for Christmas when I was six, then I gave to  Malachai for Christmas when he was five.  I assume Army Chihuahua comes from his exposure to these obnoxious Chihuahua movies that keep coming out.  He and I actually worked on a story recently where all of the dog characters go on an adventure together along with a new dog character.  I’m not sure if we wrote enough for a complete story or not but I’m hoping to make it an upcoming story arch on the site at some point.

KW:  Have you ever thought that you might call it a day with Axe Cop, or do you enjoy it as much as
when you made the first episode?

EN: There is of course always going to be days when it just feels like work, as with any job, but all in all it remains a blast for me and it still gives me plenty of laughs.  The thing about this profession is that you don’t pick your projects so much as your projects pick you. My only plan is to not make any plans at this point.  I usually say I did not plan for Axe Cop to begin so I am not going to plan for it to end.  Axe Cop found me, and when he is done he will probably hug me and fly off like Pete’s Dragon.

KW:  So, I’ve seen and heard that there is to be an Axe Cop game, anything at all you can tell us
about that? Or is it all still very ssssshhh?

EN: All I can really say is that many video game companies are very interested, but beyond that I’m as eager as you are to know who is going to be the one brave enough to make the coolest video game in the last hundred years, and what it will be like.

KW:  Is Axe Cop mad that the God of Bears ate the moon warriors?

EN: I think it is safe to say that Axe Cop is mad at all evil… though his morality in recent comics has been questionable… I think he’s mad for sure, and when he needs to team up with the Moon Warriors I assume he will just go chop the God of All Bears’ stomach open and pull them out, but I really don’t know.  That’s all up to Malachai.  We truly may never see them again.  That is why we read Axe Cop, because we literally have no idea what is going to happen next.

Interview conducted by the ever-exotic Kate “Mae” West.
If you haven’t already, do the next sensible thing and check out www.axecop.com.
There are currently three Axe Cop trade-paperback volumes available, published by Dark Horse Comics.