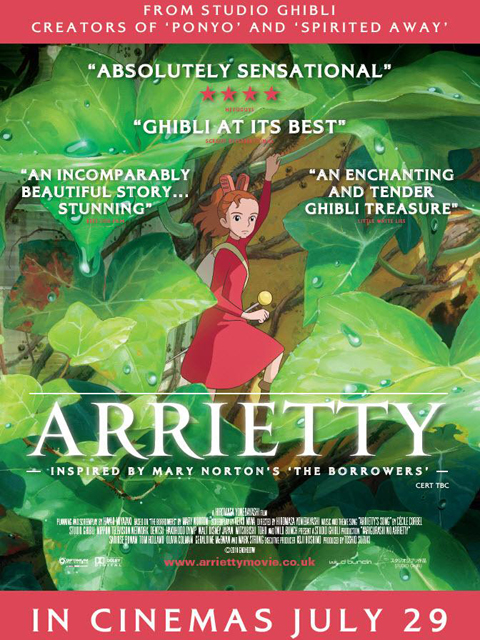 Directed by Hiromasa Yonebayashi, screenplay written by Hayao Miyazaki & Keiko Niwa, based upon The Borrowers by Mary Norton

The latest offering from Studio Ghibli (all together now; pronounced Jib-lee) is a return to form after the hit-and-miss of Ponyo. Adapted from the Mary Norton’s children’s classic, The Borrowers, the self-titular Arrietty (voiced by Saoirse Ronan) lives with her parents, Pod (voiced by Mark Strong) and Homily (Olivia Colman) Clock, in a house in the countryside. And this would be quite normal were it not for the fact that they are all tiny wee folk, standing a few inches tall; they are the Borrowers. They eke out a contented existence in the human world, ‘borrowing’ small items from their erstwhile landlords, always just enough to suffice their needs, and never more. But this comfortable life is threatened when a sickly young boy, Sho (voiced by Tom Holland) arrives at the house to stay with his grandmother, Sadako (Phyllida Law), and her meddlesome housekeeper, Haru (Geraldine McEwan).

At the start of the film, Arrietty is just celebrating her 14th birthday – she has come of age and is about to embark on her first ‘borrow’ with her robust and resilient father, Pod. It’s whilst on this first expedition that we really get a feel for the life of a borrower; the animators have captured the wonder of the human world as seen from the perspective of someone who is only a few inches high. A sugar cube is that rarest of luxuries and it is the acquisition of one for Arrietty’s mother, Homily, that ultimately puts the entire family Clock in jeopardy. Arrietty is seen by the young boy, Sho. Over the course of the first half of the film, they strike up an unlikely friendship, a bittersweet relationship that carries through to the film’s climax. The appearance of another borrower, the feral Spiller, who saves Arrietty’s father, Pod, raises the question amongst the Clock family – where are all the other borrowers? Spiller does not know, and earlier on Pod and Homily refer to neighbours who used to live in the same human house, who moved on. It is one later exchange between Sho and Arrietty that the sick boy delivers a despairing verdict on the future of the borrowers: they are destined to die out. It’s the bleakest point of the film and ultimately defines the story. When the end comes, it is sad but hopeful. It is hard not to feel that Sho is perhaps right.

Studio Ghibli, and the debut director at the film’s helm (although a veteran key animator at SG), have produced a superb adventure film, suitable for all the family. I think that this is perhaps the studio’s strongest film since Spirited Away. It is a beautiful spectacle and a good, timely reminder of the power of 2D animation in these CGI/3D dominated days. the detail of the human’s house and of the Clock family’s secret domain is intricately captured; water trickles in mammoth globules, and rodents haven’t looked this sinister since Nimh. The countryside surrounding the house is lush and vibrant – no one recreates the beauty of the natural world and its splendour quite like the craftsmen at Studio Ghibli.

The dubbed voice cast is eclectic and strong throughout (and curiously varies between the US and UK versions; Will Arnett, for example, voices Pod in the US version). Saoirse Ronan’s Arrietty is, thankfully, the standout performer; so much of the film relies on the emotion carried in her voice, and Ronan delivers near faultless character work.

In conclusion: A wonderful adventure movie that should appeal to all. This is a return to form for Studio Ghibli, who seem to have found their next directing star in Hiromasa Yonebayashi who, on this form, is a worthy, long-term successor to Hayao Miyazaki’s legacy.