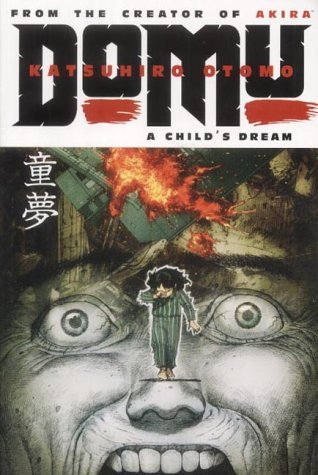 (published by Titan Books at £12.99. It is currently reprinting)

A little girl and a crazy old man battle it out for the control of an apartment complex in suburban Japan. It might sound like a strange concept for a comic, but throw in some psychic powers, a very confused police force and the close-knit, slightly claustrophobic society within the apartment buildings, and you have the unlikely ingredients for a masterpiece.

Mostly everyone, even non-manga fans, has at some point heard of Akira, Katsuhiro Otomo’s legendary comic series and breakthrough anime film. For many in the west, it was Otomo’s Akira movie that introduced them to the pleasures of the complex art form that is manga.

And in Domu: A Child’s Dream, originally released in Japan in the early 1980’s before Akira, Otomo is at his best. His work is beautifully crafted; the lines and detail of each of the buildings within the apartment complex are so strong and sharp that they sometimes overshadow the characters, giving this otherwise staid architecture an overbearing presence on the storyline.

From their initial chance encounter in the courtyard of the complex, the tension gradually builds as the two opponents move against each other, either directly or by proxy. The old man is particularly malicious and mischievous, his child-like wickedness countered by the peculiar maturity of the little girl. As with any good tension-grinder, events spin out of control in a page-turning frenzy until they ultimately explode in a dazzling finale. As a reader you are never sure if the darker side of the residents’ nature is there because they’re being manipulated in this battle of wills or whether Otomo has more to say about society. Either way, this is a fascinating, engrossing read that is manga of the highest quality.

– Domu was originally serialised in 1980, running for two years. When it was released in book form in 1983 it won the Nihon SF Taisho Award, which is the equivalent in Japan of the Nebula Award.

– The manga of Akira took eight years to complete. The movie came out before the manga was finished, similar to Hayao Miyazaki’s Nausicaä.

The Legend Of Mother Sarah (1990) is a hard-to-find collection of fantasy adventure, in contrast to the grim SF of Akira.