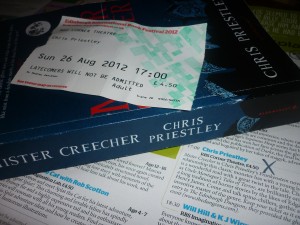 When this man speaks, you listen.

Chris Priestley returned to the Edinburgh International Book Festival for the second year running, and was pleasingly enough in a bigger venue more suited to him (the RBS Corner Theatre, instead of the smaller, more child-friendly Imagination Lab). Unfortunately, it seemed to this punter that he did not have as many fans in attendance this year, which is criminal considering his talent. He should be playing to packed out crowds. His books are classified as Young Adult, or teen, but recently his publisher, Bloomsbury, have made roads to bring him into the crossover mainstream market by re-jacketing his books. Hopefully this about-time move will introduce his work to a wider audience.

He was here to discuss Mister Creecher, his latest book, out now in paperback (Bloomsbury, £7.99). It is a slice of gothic horror with a twist of meta-fiction; that is, it takes an established literary character (Frankenstein’s monster) and meshes him into a tale that intersects with Shelley’s original. Priestley’s superlative effort begins and ends in Britain, from London to the Lake District. Priestley slips in some great literary cameos along the way, and his novel ends grimly, with a twist in the tale that made me smile, and think ‘Clever so and so’.

Anyway, his event. He was introduced by the eloquent and charming Bloomsbury representative, Jonathan Davidson, and then it was over to the stylishly attired man himself.

<If you are reading this review, then you are hopefully familiar with Priestley’s work: check out his Tales of Terror trilogy (Uncle Montague’s Tales of Terror, … From The Black Ship, …From The Tunnel’s Mouth) then his novel The Dead of Winter. He is the Edgar Allen Poe of our generation.>

Chris spoke briefly, initially about the context of the book, and discussed Mary Shelley’s original novel from which Mister Creecher takes its source inspiration, before launching into his first reading, setting the scene for when the novel’s protagonist, Billy, first meets Mister Creecher.

Chris Priestley is an excellent speaker; intelligent, matter-of-fact delivery, coupled with an ability to treat his audience with respect – that they are on the same wavelength as he is. Again, he then discussed the background of Mary Shelley’s novel, and the Romantic movement of her day; the poets Percy Shelley, Lord Byron, Keats, and the artist Turner, and so on. If you have read Mister Creecher, you will know that this knowledge and passion for the Romantic era feeds into Priestley’s novel in an evocative, colourful manner, enriching the already magnificent gothic horror tale.

The author did two more readings from his book, from the middle and near the end, and again had his audience hooked. It is a wonderful book and to hear it in the author’s voice is a treat.

The exclusive bonus at this event was that Chris Priestley read an as-yet-unpublished short story, called In The Bleak Midwinter, from an upcoming collection of Christmas horror stories (hot scoop: this collection, as yet unnamed, is due out, handily, before Christmas as an ebook…maybe). It was a short, snappy, spooky tale about carol singers wandering the streets of their village late at night, and encountering a bit of gruesome local history… An excellent tale, I am most excited to see what the rest of the collection is like. Priestley is the master of the short, spooky tale (by his own admission, he sees himself as more of a short story writer), and he engineers scares in such a perfectly executed way; he makes it look easy.

In conclusion, a great event, but hopefully next time he is in Edinburgh he will be greeted by a more numerous audience.