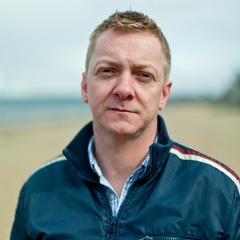 Doug Johnstone’s latest novel, Gone Again, is an Edinburgh-set thriller that has made quite the impact with critics and sales alike. Doug took time out from his hectic schedule to answer Geekzine editor Andy Jamieson’s pesky questions.

Andy Jamieson: What was the inspiration for Gone Again? And was the plot for Gone Again something that has been gestating for a while?

Doug Johnstone: Like all my books, the plot for Gone Again had been gestating for a while. I think it’s important to let an idea stew for as long as possible before committing to writing it as a book, and that gestation period hopefully helps the book to have a veracity and a passion that makes it stand out from the crowd. That’s the hope anyway.

As for the inspiration, like a lot of my recent work, it was that simple ‘what if’ moment. What if you’re wife just didn’t come home one day, what would you do? What if the police didn’t take it seriously, what if her work were the same, what if you had to cope with looking after your young child alone? What if it had happened before? What if you had your own shadowy past? And on it goes.

For any of my books, I become pretty obsessed with the subject matter while writing – this time round I was obsessed with missing persons. Hundreds of thousands go missing in the UK each year, the stats are extraordinary. There’s no law against just going missing, and the lack of resolution in that situation is what really struck me. As always with me, I wondered for a while how to make that into a fictional narrative, and eventually stumbled on the plot for the book.

AJ: The relationships between Mark, Lauren and Nathan feel quite authentic. Was it a challenge to write these characters? Did you draw on real life at all?

DJ: It wasn’t really a challenge at all, as I used a whole lot of real life and my own situation for this book. There are elements of the relationships that are different, but a whole lot of Gone Again is my relationship with my own son a couple of years ago, and a lot of the backstory of Mark and Lauren is lifted directly from my wife and me.

I don’t really shy away from using personal experience in my books, but that doesn’t mean the characters are actually me and my family. For any kind of fiction, you have to ramp up the conflict and tension, so Mark has to face things much worse than I ever have, thank God. I think using personal experience adds another layer of authenticity to a story – the little details especially. I’ve been really glad that a lot of the reviews have mentioned the authentic nature of the father-son relationship here, that was really important to me.

AJ: Do you have any rituals or habits that you go through before a session of writing?

DJ: None, I just sit down and write. I don’t believe in writer’s block either, that’s a complete luxury. That’s maybe down to the fact I was a journalist before I was a fiction writer – the idea of not meeting a deadline is anathema to me.

I try to write a little every day, usually in the morning, as that’s when my brain’s sharpest, and when I have peace and quiet as the kids are at school and nursery. It’s not about sitting around waiting for the muse, it’s about keeping your head down and getting words on the page.

AJ: Was Gone Again an ‘easy’ write? Did it take long to settle on a draft that you were happy with?

DJ: It took me about the same time to write as my last few books – a first draft in about three months, then a couple of months of redrafting. It was hard to write in one respect, because I felt I was more emotionally involved in this story. There were two scenes in particular that I really struggled to write as they were so packed with emotion and dug deep into my own psyche.

As for getting to a draft you’re happy with – does that ever happen? I usually do around three or four drafts then let my agent and a couple of writer friends see it. Then a couple more drafts, then off to the publisher. I wouldn’t use the word ‘happy’ to describe how I feel about it at any point, though. I pretty much abandon the novel when I can’t stand the sight of it anymore, and I hope that others don’t think it’s a pile of shite.

AJ: Has Gone Again attracted any television or film producers? Do you think it would translate well to the small and large screens?

DJ: It hasn’t attracted any notice yet, but it’s early days. I think it has more appeal for film than television, just because of the nature of the story. It is fairly cinematic, I guess, in terms of backdrop and emotional story arc etc. I tend to be very influenced by film, as much as by books, if I’m honest, so it’s no real surprise that people sometimes say my books would make good films. My previous two novels, Hit & Run and Smokeheads, have both been optioned, one for TV the other for film, but they’re a million miles away from getting made. Wait and see.

AJ: What is the best advice on writing that you have been given?

AJ: What book(s) have you read recently that you would recommend to others?

AJ: What are you working on at the moment?

DJ: The next novel is done. It’s called The Dead Beat, coming out next year sometime. It’s about an obituary writer and suicide. Another hilarious rom-com from me, then! Not.

Thanks to Doug for his time.

Gone Again is out now, £12.99 in trade paperback, published by faber and faber.

Doug will be appearing at the Edinburgh International Book Festival this summer, on Thursday 15th August at 6.45pm, along with fellow crime writer, Laura Lippman.