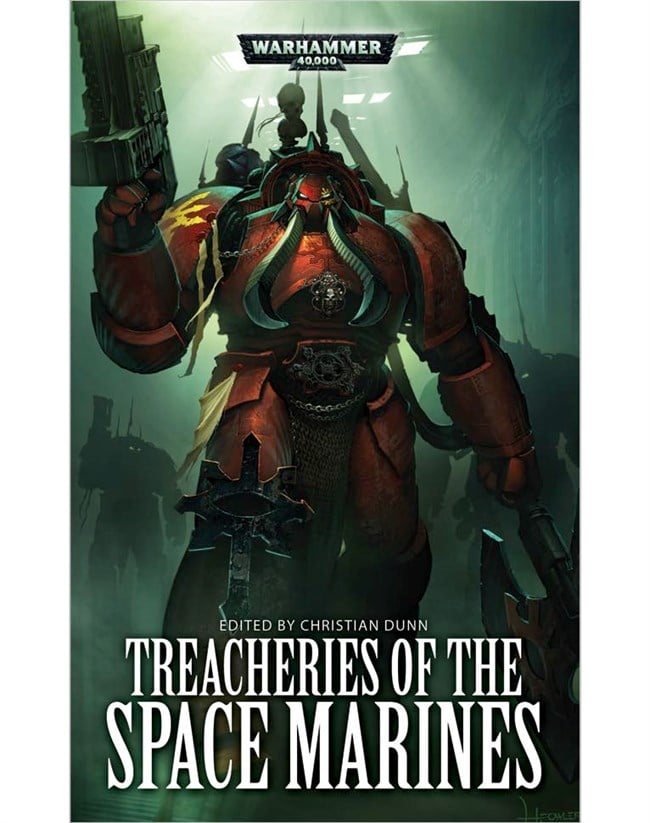 Griff delves into a war-torn anthology of heresy and betrayal from the vaults of the Black Library….

There is an old saying that the Devil gets all the best songs. In the Grim Darkness of the 41st millennium, it is almost comforting to know that little will have changed: Chaos has some damned excellent stories, as Treacheries of the Space Marines so excellently demonstrates.

Naturally, one would expect Chaos Space Marines to be the subject of brilliant, gripping tales. With all the strength and genius of their loyalist brethren, but enhanced with a Machiavellian streak a mile wide and a spectrum of psychoses unique in the Warhammer 40,000 universe, they make for excellent subject matter.  And the authors featured in Treacheries do not disappoint: schemes, insanity and bloodshed abound in every story, all lavishly wrapped in the nightmarish imagery of the daemonic and Immaterium.  The imagination at work is equal parts impressive and singularly disturbing, with musical plagues and twisted Slaaneshi torture practices lingering long and wonderfully hideous in my memory.

What really amazed me with Treacheries was the depths the stories explored.  Bloodthirsty readers won’t be dissatisfied, for battles certainly abound and the action is that which can only be provided by Space Marines: visceral in the extreme.  But around these flares of ultra-violence, and even sometimes amidst them, the authors are not afraid to dig into their characters and the situations in which they find themselves.  The power-plays between such mighty, fickle warriors, the unique ethos of each individual Traitor Legion, the very psychologies of these monstrous figures that haunt the Imperium’s nightmares.  It all serves to add rich streaks of detail that transform Chaos from simplistic, one-note ‘Insert-Your-Battlecry-Here’ maniacs into intricate, twisted and often utterly fascinating characters.

If there’s one gripe I have with Treacheries, it’s that very few of the stories have any great tension in them.  The only sense of any characters in actual jeopardy came from the ordinary, Imperial characters going up against these fallen angels of death; said angels themselves, as is probably fitting for the setting, sail through the action not quite effortlessly, but certainly without the will-they-won’t-they question of survival hanging over their heads.  The redeeming irony of this problem is that, very often, the real tension and threat is off the battlefield, often posed more by characters’ ‘allies’ than their enemies.  Whatever tension certain stories lack in terms of survival is more than made up for in terms of trust; as a reader, I found myself constantly questioning who could be trusted, how far they could be trusted, and if a dagger in the back was coming what form would it take.  All in all, from an anthology with Treacheries as the operative word, perfectly satisfying and enjoyable as a narrative experience.

I would be remiss if I didn’t mention Jonathan Green’s short story Liberator as the head-and-shoulders champion of this anthology.  That is not to devalue any of the other entries (indeed, the consistently high quality only enhances Liberator‘s success), but this is hands-down the bravest and most successfully executed depiction of a heretic’s genesis since the Eisenhorn Trilogy, with an ending so wonderfully ambiguous that it proves ‘grimdark’ does not have to be a negative term.

The danger of any anthology is that it will be of mixed, inconsistent quality.  There will be peaks of excellence and uninteresting troughs that, thanks to an anthology’s modular nature, can be hopped over.  Treacheries does not fall foul of this danger; even if I had not been reading it in my capacity as scrutiniser of all things geek, it would have been a cover-to-cover experience without question.  No story steps on another’s toes, each offers its own hook and angle on Chaos Space Marines, and it has left with me with the best final impression possible – that I want to experience more tales featuring the Imperium’s Arch-Betrayers.

On the Black Library website, treacheries of the Space Marines‘ page boasts that it features ‘some of Black Library’s finest authors’.  Not an empty boast, I can assure you.