Jonny investigates that rarest of beasts: a tie-in video game which is actually really good….

The Walking Dead: The Game is a puzzle-adventure originally released in April 2012, with successive episodes made available over the following four months resulting in a 5-act story.  Since then there’s also been a sixth episode released, titled ‘400 days’ which is set to bridge the gap between the first game and the forthcoming sequel.

Despite taking place in the Walking Dead universe, the game itself features next-to-no crossover with the comics or the TV series.  One of the reasons I’d not picked up this game sooner was that, having neither read nor watched any Walking Dead, I’d assumed I’d be thrown headfirst into a full cast of characters I knew nothing about, and the whole thing would be completely lost on me.  This couldn’t be further from the truth.

The game opens with the player character, Lee, in the back of a police car, being driven down the highway.  The driver asks you a few questions, and from this you’re able to glean your arrest was due to you attacking someone who was somehow connected with your wife.  Before you have a chance to figure anything else out, however, you’re separated from your escort, and must seek aid inside a seemingly empty house. 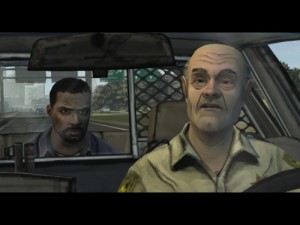 After a run in with your first few walkers, you’re introduced to Clementine, an eight year old girl who has lost her parents.  Taking direction from likes of The Road, the responsibility to protect Clem quickly forces you to make decisions not just for your own safety, but for hers as well.  With the aid of some survivors, Lee and Clem find refuge at a farm outside of town where a selection of new characters are introduced, but thereafter I can’t say much more.  Not for fear of spoilers, but because decisions you make beyond this point will have such a major impact on the game world that the way my story turned out could quite possibly be unrecognisable compared to someone else’s.

The Walking Dead is one of few games where I’ve truly felt my actions were changing the story in ways that were massive; I couldn’t imagine how it would work in any other way.  Although it does have sections based around problem solving and puzzles, more like Monkey Island, the majority of the game is played like an interactive movie, with you choosing dialogue that will affect everyone and everything.  To keep you on your toes the game uses a timer when selecting what to say, so during a heated argument, you really have to think fast and go with your gut, as you won’t have time to mull it over.  This is such a brilliantly engaging innovation; I was left speechless at a number of key points in the game, where I simply couldn’t decide what to say before I ran out of time.  The other survivors react to your silence realistically, and will often scold you if you appear to be taking sides, or avoiding tricky subjects: I even opted to purposefully remain quiet during a dispute between husband and wife, because zombie apocalypse or not, I know when not to get involved! 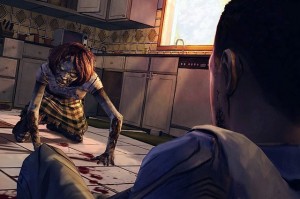 Not only is the dialogue system well-executed, but the choices you’re given are more diverse than I’ve seen in any other game, so at no point was I forced to compromise my decisions.  For instance, at one stage early on in the series, after finding a survivor who’s been bitten, she asks you for your group’s pistol so she can kill herself before she turns.  Not only could I refuse to give it to her, but I was also able to refuse to shoot her myself, and opted instead to simply try and leave her.  When later confronted about this, I was able to reason with my fellow survivors that we couldn’t waste the bullet.

The game is short, there’s no arguing that; you can comfortably play it once over the course of five days, taking an episode each evening. However, due to the hugely branching direction in which the plot can develop it has considerable re-playability, if you want to take the time to answer all of those ‘what ifs’.  That said, after certain events occurred I felt such dread at the prospect of ruining everyone’s chances of survival by playing the next episode that part of me wanted to simply stick my head in the sand and pretend everything would be fine for Lee and Clementine!  The only other game to ever make me feel so conflicted at the prospect of progressing further was Amnesia: The Dark Descent, but that’s another story.

The Walking Dead: The Game is sure to leave a lasting impression on you, and I’m not in the least bit ashamed to admit tears were pricking my eyes on more than one occasion.  I honestly think that £20, which seems to be the average retail price, might be a little much, if only because it is such a short game, but if you can grab a copy for £15 or less, you shouldn’t miss the opportunity.  I’d advise you to take a box of tissues to go along with it though, as it gets pretty grim.

The Walking Dead: The Game is available now across multiple platforms.  The sequel is slated for release later this year.