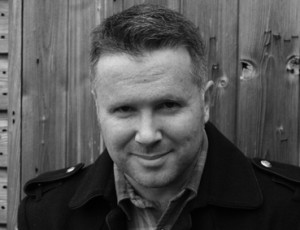 Curtis Jobling is a man of many talents, some of them more obvious than others. Aside from his impressive sideburns, he is a multi-talented artist. Starting out as an animator, he rose to prominence due to his character designs for Bob The Builder. He began to branch out into other animation (Curious Cow for Nickleodeon) and illustration work (such as the Frankenstein’s Cat picture book – also a CBBC animation), before trying his hand at books for older children with the fantasy-horror series, WereWorld (a series of six books in total), published by Puffin. Most recently, he has had another CBeeBies animated hit with Raa Raa The Noisy Lion, and this summer had a new book out for older children, Haunt: Dead Scared, a ghost story published by Simon & Schuster, OUT NOW in paperback at £6.99, available from all good and nefarious bookselling emporiums.

He took time out from his hectic schedule of witty Twitter posts to answer Geekzine UK’s mostly gentle questions,  from Editor-in-Chief, Andrew Jamieson….

Andrew Jamieson: Your latest novel Haunt: Dead Scared is a contemporary-set ghost story – could you discuss how the idea came to you and what challenges you faced in its writing?

Curtis Jobling: It’s based – very loosely – on my life growing up in Warrington in the northwest of England. Many of the things that occur to Will and his friend, Dougie (our protagonists), happened to me in my teen years, although admittedly I didn’t get killed in a hit and run. I don’t think that’s too much of a spoiler. I wanted to write a creepy tale that had a lightness to it. Haunt: Dead Scared is a darkly comic ghost story. The biggest challenge was writing in a very different style to my previous work, being well known as a fantasy author. It’s really a bit of a coming of age tale, with a first love and murder mystery thrown in for good measure.

AJ: Haunt: Dead Scared is quite a departure from your WereWorld books. Was it a deliberate choice to step away from the fantasy genre and try something else?

CJ: I would hope that I’m able to continue to switch genres as a writer. It certainly keeps me on my toes as I’m being challenged all the while, forced into remaining fresh. I wouldn’t rule out returning to fantasy – I have a number of stories set within the Wereworld universe that it’d be great to get my teeth into – but I have a number of other books lined up to write first. At heart, I’m still a big old fantasy geek, so there will always be fantastic elements to my storytelling.

AJ: You are working on a sequel to Haunt. What can you reveal about this next book?

CJ: It takes place six months or so after the events in Dead Scared, and picks up with Will thinking he has a handle on his world and his strange predicament. However, fresh dangers come into his (un)life, and he starts to get to the bottom of why he hasn’t ‘moved on’. There are some shocking revelations that rock him to his core. Comedy is still on hand to lighten the mood, but there are some truly dark, chilling moments in the sequel.

AJ: Last month you appeared at the Edinburgh International Book Festival and, as well as promoting Haunt, you were also there with your latest picture book, Old Macdonald’s Zoo (published by Egmont, OUT NOW, £6.99), illustrated by Tom McLaughlin. What is it about writing for different age ranges that you enjoy?

CJ: I guess I’ve always had to be versatile, being both an illustrator and author, so that switch of pace and style is something I’ve grown accustomed to. Working originally in the animation industry, climbing up the production ladder, I had to hustle for jobs and push myself. As a freelancers, nobody owes you a living, so you have to have a genuine hunger to succeed and get better at your craft. At any given time in animation I’ve been a writer, creator, designer, model maker, producer and director. The only job I never did was the animation! I’ve always loved those opportunities to wear different hats and I’ve carried that through into my publishing work. I can really let the big kid out when I write or illustrate picture books. To then move onto writing the older novels is a complete departure. That’s a thrill for me.

AJ: What other book projects are you working on?

CJ: I’m working on the second draft of a new book for Penguin US, the first of two novels featuring a character called Max Helsing: Monster Hunter. Big, unadulterated middle-grade monstrous fun! Tentacled horrors, dark fairies, trolls, bigfoot, non-sparkling vampires, goblins, ghouls and ghosts – we’ve got every corner of monsterkind covered in these books. Max is the last in the long line of Van Helsings, and he’s a slacker kid living in the ‘sleepy’ town of Gallows Hill, outside of Salem in New England. Think of a Lovecraft inspired, creature feature, cryptozoological monster mash and you’re getting close. As you can tell, I’m having a lot of fun with it. I’m also about to commence writing some exciting fantasy books for Puffin UK, but I’m sworn to secrecy presently. You can also look out from more picture books from myself and Tom McLaughlin through Egmont. Tom’s putting the finishing touches to the artwork presently, so it’s all go!

AJ: The Wereworld books really marked you out as a fantasy author to watch. Do you have any plans to return to a genre you so clearly love?

CJ: Would love to. I’ve an idea for a book that’s distinctly Young Adult in a fantasy setting – to be honest, Wereworld frequently wandered, staggered and bled into that area anyway. But this would be unashamedly darker and edgier. Again, it’s a case of finding the time to write it. Presently I’m having fun jotting ideas down and slowly building the world within documents on my laptop. It’s populated by, and pardon my French, a right shower of bastards. 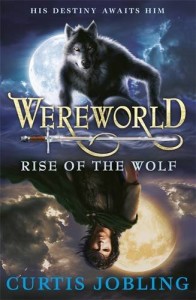 AJ: You are also known for your animation work. Aside from Raa Raa The Noisy Lion, what other projects do you have in the works?

CJ: Nothing on the horizon presently, though I’ve not ruled out a return to animation if it’s the right project. I’m expecting to have some talks in the next 12 months about one property, but it’s a ‘wait and see’!

AJ: What animated shorts or features have stuck with you over the years? Do you have any favourites you return to?

CJ: Of my own? It’d be Curious Cow, a series of bovine-related animated suicides I conceived, designed and directed for Nickelodeon back in the day. It’s my homage to the shows I grew up loving as a kid – Tom & Jerry, Wile E Coyote & Roadrunner, Bugs Bunny etc. Basically, if it featured cartoon violence then it was right up my proverbial strasse. As an influence on me, I have to say the Oscar nominated The Sandman by Batty/Berry/Mackinnon is still a short film I show when I visit colleges and universities to talk about the industry. It’s the one that gave me a kick up the pants and made me think: “That’s what I want to do for a living!” The fact those three guys are friends of mine is secondary – it’s a genius piece of short animation. Watch it! Now! You can see each of the above animations on the Tube of You.

AJ: What advice would you give to any aspiring writers and / or animators?

CJ: Three words of advice for writers: read, read, read. And for animators, you’re ahead of me: sketch, sketch, sketch. Obviously, you need to write as well, but reading as much as you can from as many genres can only help you with your understanding of language and storytelling.

AJ: ….And what was the last good book that you read?

CJ: Extinction Machine by Jonathan Maberry. And yes, it was rather splendid. There’s a writer who can deftly change genre and audience. You should check out his Rot and Ruin series of YA zombie books. They’re fabulous.

Thank you to Curtis for his time.