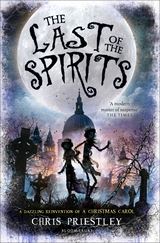 The Last of the Spirits

The release of a new Chris Priestley book is a joyous occasion. The release of a Chris Priestley book at Christmas is even better. His track record for this wintry season is excellent. 2011’s The Dead of Winter is, was and remains one of the finest ghost stories committed to page, and is ripe for a television adaptation. 2012’s Christmas Tales of Terror was a wonderful compendium of yuletide scares.

The Last of the Spirits furrows similar meta-turf to Priestley’s own Mister Creecher, the  central conceit being that it branches off from an established literary classic – with MC it was Frankenstein, with Spirits it is Charles Dickens’ A Christmas Carol. Sam and Lizzie are two street urchins (appearing ever so briefly in Dickens’ novel but I won’t spoil the revelation as to who exactly they are) living a rough life in the shadows of Victorian London. The Last of the Spirits is their story, and it is one of hardship and sorrow. Priestley’s depiction of Sam and Lizzie’s homeless vagrancy reads authentic, and feels evocative.

The plot kicks into motion when Sam, slighted by a brief and bitter encounter with Ebeneezer Scrooge, decides to perpetrate a mugging on the old mizer, and even goes so far as to break into Scrooge’s house. It is there that he and Lizzie witness the visitation of the ghost of Jacob Marley (Scrooge’s late business partner is revealed to have links to Sam and Lizzie, in one of the books more inventive plot strands).

Taking his lead from Dickens’ own structure, Priestley’s book mirrors slightly that of A Christmas Carol, as Sam and Lizzie encounter the same three ghosts as does Scrooge. Priestley displays his absolute knowledge of Dickens’ seasonal favourite, as the story of Sam and Lizzie weaves effortlessly in and out of Scrooge’s own plot strand. The conclusion, when it comes, is satisfying and emotionally powerful and, as a long time reader and fan of Priestley’s work, some of the author’s writing towards the end of this book displays some career best work. (I have page 157 seared into my mind, most specifically; “… for until then he had not understood how very heavy hate can be.”)

I don’t think this is Priestley’s best book (The Dead of Winter, without a doubt in this reviewer’s mind, is the author’s best book) but it once again demonstrates why he is one of Britain’s best and finest writers. The Last of the Spirits should be essential reading for anyone who is a fan of A Christmas Carol.

You can follow Chris Priestley over on his blog: http://chrispriestley.blogspot.co.uk/