The Void is a low budget horror film that attracted some praise and attention with its ’proof-of-concept’ trailer last year, ahead of reaching full funding for actual production. It hit cinemas, streaming sites and home formats at the same time earlier this year, to some acclaim. It didn’t last long in the cinemas round my neck of the woods, so I’d been meaning to catch it on home format.

Thankfully, the film itself lives up to its hype, and certainly exceeds the promise of that great trailer last year. The two writer-directors, Steve Kostanski (also an extremely inventive visual effects wizard) and Jeremy Gillespie (also doubling up on titles and music) have squeezed every last penny out of their tiny budget, most notably in their impressive visual and special effects, and their imaginative production design and locations. It is no surprise to learn that Kostanski and Gillespie have a string of credits to their names; Gillespie is a veteran art director / graphic designer, from countless big productions, most recently the likes of IT, Suicide Squad, the excellent Hannibal tv series, and the next Guillermo del Toro film, The Shape of Water. Kostanski meanwhile is an experienced special makeup effects artist, who also worked on IT, Suicide Squad, and Hannibal, but also del Toro’s superlative Crimson Peak. These are men of considerable talent and experience.

The Void is at once an ode to the budget-savvy, narratively lean horror films produced in the 1970’s & 80’s by the likes of John Carpenter, George A. Romero, Tobe Hooper, Stuart Gordon, Peter Jackson and Sam Raimi, amongst many others, but also to the horror literature of H.P Lovecraft and Clive Barker. The gloopy, gruesome visual effects are reminiscent of those cinematic horror maestros mentioned above, particularly Barker’s own Hellraiser, and Jackson’s early New Zealand-set films.

The plot is pure pulp, involving a sheriff investigating a local crime, leading to the nearby hospital, where the sheriff’s estranged wife, a nurse, is on shift. The hospital is soon after surrounded by blade-wielding, white robed cultists, determined to not let those within the building leave. Violence erupts in the hospital, leaving a small group of survivors, misfits and strangers both – some of whom are not what they seem – to try and survive against the odds. A simple plot, then, but mighty effective, with a suspenseful opening act that gets things moving quickly, ramping up the tension, leading to a siege in the hospital. The Void is high on action, and the largely unknown cast (aside from veteran Kenneth Welsh) are an enthusiastic ensemble and pull us through the shocks, gore and batshit weirdness with wide-eyed terror… and there are some genuinely nutso set-pieces and visuals here. (compared to Ridley Scott’s disappointingly insipid Alien: Covenant, out not long after, made for approximately eighty times The Void’s budget, Kostanski and Gillespie’s film is a marvel) 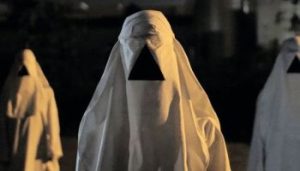 One of The Void’s sinister cultists.

The clue is in the title, and the sequences and shots of this mysterious other realm are stunning and beguiling, all accompanied by a moody, atmospheric synth soundtrack collaboration by Blitz//Berlin, Joseph Murray, Lodewijk Vos & writer-director Jeremy Gillespie. Bravely, perhaps, the film-makers do not opt for a neat resolution, instead aiming higher than such a bookend, beyond homage, resulting in a suitably haunting finale, that reminded me slightly of Carpenter’s excellent Prince of Darkness (for some, the last truly great Carpenter film). Whilst The Void is not quite that good, neither is it Ghosts of Mars…

Kostanski and Gillespie are directors on the rise, of that there is no doubt, and their next project will no doubt possess a bigger budget than The Void – hopefully it will be just as good.

Quite a good selection of extras, with two interesting Making Ofs, one of the overall production, and one focusing on the creature work – both are fascinating and show just how much effort and budget wrangling went into The Void’s creation. The set photography is good, as is the Proof of Concept trailer. I didn’t listen to the director’s commentary – they give a good account of themselves in the two docs, but on the strength of their eloquence I suspect the commentary would be worth a listen.