The year that was 2017 delivered some cultural geekish delights. In the first of two linked features, Geekzine editor-in-chief Andrew Jamieson takes a roughshod look at some of the genre films and tv shows that kept us nerds smiling – and grimacing. It wasn’t all good, eh?

Split (released in January) James McAvoy gives one of the performances of the year, and of his career, in this taught, twisting thriller from M. Night Shyamalan. A definite return to form for the writer-director, who has had more misses than hits in recent years.

Get Out (released in March) The debut feature film from Jordan Peele (of Key & Peele fame), this is ostensibly a horror, wrapped in biting satirical comedy. Approached with tongue firmly in cheek, its more ridiculous moments are outweighed by the sheer onslaught of thrills and shocks. 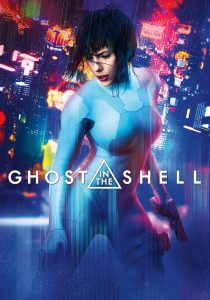 Ghost In The Shell, adapted from the anime and manga

Ghost In The Shell (released in March) The live action adaptation of the Japanese manga series is better than many give it credit, delivering some cyberpunk visual splendour. I reviewed it for reviewsphere.org earlier this year, and (mostly) liked it.

Guardians of the Galaxy Vol. 2 (released in April) Not quite the lean machine that the first movie was, this second outing for the galactic misfits is overlong and dogged by pacing issues. However, there is lots of enjoyment to be had from the onscreen chemistry between the Guardians and Kurt Russell’s scenery chomping turn as Ego the living planet.

The Red Turtle (released in May) Academy Award winner Michael Dudok de Wit is the first Westerner to direct for the acclaimed Japanese animation studio, and in his first feature film he delivers a philosophical fable of man’s struggle with nature. Engrossing and rewarding, and an interesting, less child-focused production for Studio Ghibli. I reviewed it for reviewsphere.org, and was very impressed. 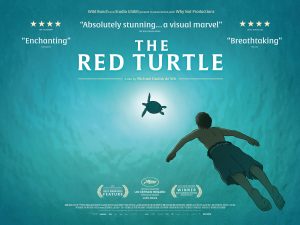 Wonder Woman (released in June) Gal Gadot, as Wonder Woman herself, makes an impact in the biggest hit of DC’s superhero series in this origin tale, proving that her scene-stealing cameo in Batman v Superman was no fluke. Mixing Greek mythology with World War One espionage is not the most obvious of plot-blends, but in the talented hands of director Patty Jenkins, assisted by a stellar supporting turn from Chris Pine, this is a very charming, watchable jape.

Spider-Man Homecoming (released in July) Tom Holland’s Spidey was one of the highlights of Captain America: Civil War, and he carries that bravura into the first official MCU (Marvel Cinematic Universe) outing for Spider-Man, with Robert Downey Jnr and Michael Keaton also on fine form in support. Some great character moments outshine a somewhat overly familiar plot.

Dunkirk (released in July) Brit director Christopher Nolan returned with this World War Two epic about the evacuation of British troops from the port of Dunkirk. With an inventive use of timeframe and narrative, this was easily the year’s most intense, full-on cinema experience, particularly the teeth-rattling imax showing.

Blade Runner 2049 (released in October) As unnecessary sequels go, this had no right to be any good. However, with director Denis Villeneuve on board, and fresh off The Arrival, we were never going to be served a lukewarm dish. Whilst this was never going to better the original Villeneuve did at least match (if not supersede) the visual and sonic spectacle of Sir Ridley Scott’s 1982 masterpiece. The script fluctuated between moments of invention and engrossing science-fiction, but also fell prey to third act wobbles and a too-neat finish. Look for a feature article on this film early 2018.

The Limehouse Golem (released in September) A gothic murder-mystery adapted from Peter Ackroyd’s novel by the screenwriter, Jane Goldman, who has form when it comes to adaptations in particular. Bill Nighy is on excellent form as Inspector Kildare, and it was reviewed (here) very favourably by the Geekzine’s Genevieve Taylor. 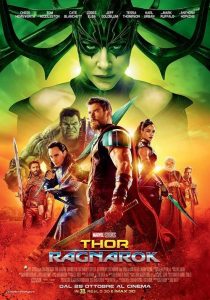 Thor Ragnarok (released in October) Easily the year’s most enjoyable movie – and better than any third film in a series deserves to be – that combined an intoxicating mix of drama, action, spectacle and humour. A great adventure movie that gave audiences lots of happy moments, particularly when Thor and Hulk team up. Director Taika Waititi matched the quality of his 2016 critical hit, Hunt for the Wilderpeople, proving that he is an auteur on the rise.

Paddington 2 (released in November) Hugh Grant delivers probably the performance of his career in this madcap sequel to 2014’s very charming original. Lots of fun for all the family.

Blade of the Immortal (released in December) Veteran director Takashi Miike’s adaptation of the long-running manga series came and went in the blink of an eye, lacking the distribution and marketing to make any impact at UK cinemas, but proved that Miike is still going strong over a hundred films later.

Star Wars Episode VIII: The Last Jedi (released in December) A film that has proven to be very divisive amongst audiences and critics, this just about delivers on expectations but is still not the Star Wars film many of us hope for. Less homage heavy than The Force Awakens and more intent on moving the new story arc along, the most satisfying plotline of the film sees Mark Hamill’s Luke Skywalker and Daisy Ridley’s Rey shine as master and pupil, as Jedi mythology and legacy is explored. We’ll be looking more closely at Episode 8 in an upcoming article this month. 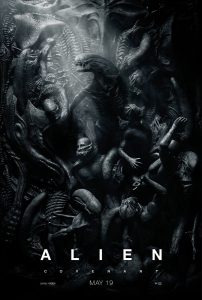 Alien: Covenant (released in April) 2012’s Prometheus had ambition to spare but was let down by a scrappy, poorly scripted second half. Unfortunately, Alien: Covenant saw Sir Ridley Scott essentially recycle his own Alien but without any of that film’s quality. Alien: Covenant was bereft of ambition and scuppered itself with a clunking script and a clumsy plot, that favoured gruesome spectacle and mad robot hijinks over xenomorph-fuelled space terror – that fans of the series are crying out for. Hopefully with Disney buying out Fox, we’ll see some sensible decisions made over the direction of this series, and Sir Ridley Scott is by no means the authority on the Alien films. Whilst Elysium director Neill Blomkamp’s proposed ‘Aliens 2.5’ is perhaps not the answer, some fresh vision is required for the series to survive and thrive. I reviewed Alien: Covenant for reviewsphere.org, and we’ll be looking at the future of the series in an upcoming article.

Brimstone (released in September) Dutch director Martin Koolhoven delivers a relentless and utterly bleak western, divided into four segments all titled with references to the Old Testament. Packed with excellent performances from the likes of Guy Pearce and Dakota Fanning, Brimstone is beautifully shot, and starts promisingly – however, it suffers from its own relentlessly bleak plot, ultimately becoming an elongated exercise in predictable, grinding cliche. Michael Winterbottom’s The Claim covered similar ground but with better results.

Mother! (released in September) Good grief. Darren Aronofsky has never been a cautious director but he always had a keen eye for balancing story and character. Mother! is a film of two halves and for all the excellent tension building of the first half, the film then unravels into a spectacular mess. Excellent performances do not save the film in any way. A pretentious experiment gone wrong. 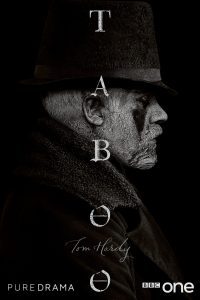 Taboo (on BBC One from January to February) This Tom Hardy produced and acted mini-series channelled the darker elements of the works of Joseph Conrad and Jack London with beguiling results. Hardy turns in one of his best performances, obtuse and enigmatic all at once, and he is ably served by a twisting gothic mystery of a script co-written by Steven Knight, performed by a fantastic cast (including Jonathan Pryce, Stephen Graham, Oona Chaplin and Franka Potente), and shot through with atmosphere and portentous foreboding.

Twin Peaks: The Return (on Sky Atlantic from May to September) This year saw the return of David Lynch’s seminal tv series, Twin Peaks, and it delivered its peculiar charms over the course of 18 deranged episodes, giving fans some kind of closure for cherished characters but delivering sucker punches at regular intervals. Predictable it wasn’t, and eye-catching and mind-boggling it often was.

The Handmaid’s Tale (on Channel 4 from May to September) This Hulu produced adaptation of Margaret Atwood’s harrowing vision of a fascist future America was riveting viewing across its ten episodes, with very distinctive visual style and a gripping central performance from Elizabeth Moss as Offred, which saw her bag an Emmy last year. Quite possibly the favourite to bag the Best Actress award for a television drama series at this year’s Golden Globes…

Ronja the Robber’s Daughter (available to stream from Amazon Prime Video) This debuted on Amazon Prime at the tail end of 2016 and was recently released on dvd and blu-ray. Directed by Goro Miyazaki (Hayao’s son), it is a beautifully conceived fantasy series that delivers a compelling, soul-nourishing tale of the friendship between a boy and girl, from rival robber gangs. Adapted from the book by Astrid Lindgren, it’s a long haul at 24 episodes but is worth every minute of your time. 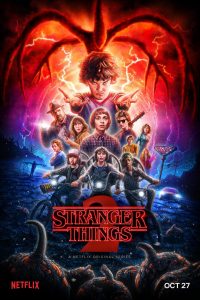 Game of Thrones season 7 (on Sky Atlantic from July to August) The shortest season so far delivered the most action, spectacle and plot progression of the series. Some satisfying character arcs came to fruition and the end is now in sight. The last episode served up some plot developments that don’t bode well for a pair of well loved characters…

Stranger Things 2 (on Netflix from October) An impressive sequel to last year’s surprise Netflix hit, this season did not disappoint and crammed in more spectacle and bright character moments along with plenty of retro thrills and scares.