The Best of the Black Library 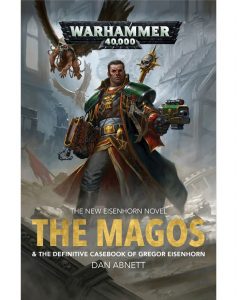 We here at the Geekzine are big fans of Games Workshop and the Black Library, so our editor Andy Jamieson thought it proper to mark the occasion with a list of some of the best books (in no particular order and by no means comprehensive) to come off the Black Library’s prolific production line.

The Eisenhorn Trilogy by Dan Abnett (2001/02) A seminal trilogy of books – Xenos, Malleus and Hereticus – and some of Abnett’s best work. These tales of the charismatic Inquisitor Gregor Eisenhorn, and his varying assortment of companions, explored parts of the 4ok universe previously ignored, and raised the bar in terms of the quality benchmark that would go on to be a staple of the Black Library’s output. Abnett’s latest book, Magos, sees him revisit his old friend, Eisenhorn, and also collects together all the short stories about the adventurous inquisitor.

Storm of Iron by Graham McNeill (2002) … in which the traitor space marines of the Iron Warriors Legion lay siege to a seemingly innocuous Imperial planet. A novel in which the bad guys are the driving force, and nothing the Imperial forces do seems to make a difference. Warhammer 40k action has rarely been depicted as well as it is here, equal parts thrilling and bleak. 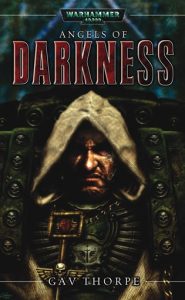 Fell Cargo by Dan Abnett (2006) Piratical fantasy in the Warhammer Old World, as Captain Luka Silvaro reclaims his ship and sets off on a deadly journey. Swashbuckling action and adventure that tapped into the Pirates of the Caribbean popularity and arguably surpassed the antics of Depp and co.

Angels of Darkness by Gav Thorpe (2003) One of the most important novels about space marines that the Black Library has ever released. What Gav Thorpe has forgotten about the Dark Angels marines is more than most mortal minds could begin to comprehend. This book used the mystery of the chapter’s background to excellent effect, essentially redefining the whole identity of the infamous First Legion. Thorpe would continue the plot strands set up in this book in his also excellent trilogy, The Legacy of Caliban.

Atlas Infernal by Rob Sanders (2011) is a thrilling, twisting-turning adventure across the 40k universe as Inquisitor Czevak steals the titular atlas, putting him in harm’s way of the dreaded Eldar Harlequins and also Ahriman, arch-sorcerer of the Thousand Sons traitor space marines. Full of wonderful characterisation and inventive plotting.

Carcharodons: Red Tithe by Robbie MacNiven (2017) Taking an obscure space marine chapter such as the Carcharodons (once upon a time known as the Space Sharks!) and forging them into a memorably vivid assortment of veteran warriors is no easy task. Author MacNiven proves he has skill, talent and imagination of the highest calibre, delivering easily one of the most impressive space marine novels, up there with the best of Abnett, McNeill, Thorpe and Swallow. Red Tithe made the Geekzine’s best books list of 2017. An eagerly awaited sequel, Outer Dark, is released this year. 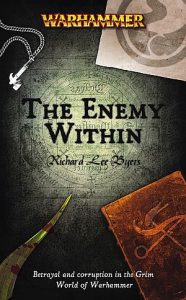 A classic of the Warhammer Fantasy range.

The Enemy Within by Richard Lee Byers (2007) Taking as inspiration an old campaign book from Warhammer Fantasy RPG, Byers crafted a desperate tale of a compromised hero, going undercover in a chaos cult in a bid to win his freedom from a malicious witch hunter. Taking the best bits of the RPG and fusing them with great characters, this is one of the defining works of the Warhammer Fantasy range.

Broken Honour by Robert Earl (2007) … is a brutal siege warfare novel, as the city of Hergig holds back a horde of bloodthirsty beastmen. Mercenary Captain Eriksson is a grizzled sword for hire who inadvertently leads the forces of Hergig through a brutal siege. A superb fantasy war novel, with epic battles and plenty of intrigue in supply.

A Murder in Marienburg by David Bishop (2007) A superb city-based novel, as ex-soldier Kurt Scnell is promoted to a captain of the watch, in one of the more wretched parts of the city-port of Marienburg, a bustling trading hub on the fringes of the Old World’s empire. Written by 2000AD regular Bishop, he infuses the Warhammer Fantasy setting with a hardboiled noir vibe. With added Skaven to boot. Achieved some notable success, enough to earn a sequel, A Massacre in Marienburg.

Brothers of the Snake by Dan Abnett (2007) One of Abnett’s best 40k books features the little known space marine chapter of the Iron Snakes. Following Sergeant Priad and his Damocles squad, the seven different inter-linked stories see Priad and his men face down Dark Eldar, Orks and foes of the more insidious kind. One of two novels recently voted for by fans for a re-release this year.

Fulgrim by Graham McNeill (2007) The fifth book in the ongoing Horus Heresy series is a sweeping, ambitious epic, charting the rise and fall of the Emperor’s Children space marine legion, as they descend from one of the Emperor of Mankind’s most loyal band of warriors to arch traitors of the very worst. Some of McNeill’s finest work, capturing the tragic fall of these once-heroic warriors in engrossing detail.

A Thousand Sons by Graham McNeill (2010) That man McNeill was at it again for another excellent Horus Heresy novel, and one of the best-selling of the series. Similar to Fulgrim, the author charts the rise and fall of another cursed space marine legion, this time the psychically charged Thousand Sons, led by their charismatic primarch, Magnus the Red. It’s a fascinating novel and, twinned with Abnett’s Prospero Burns, examines the complicated rivalry between the Thousand Sons and the Space Wolves. The Thousand Sons are unfortunate victims of their own ambition, and the book culminates in the invasion of their home world by the Space Wolves.

Flight of the Eisenstein by James Swallow (2007) The fourth book in the Horus heresy series, as James Swallow captures the descent of the Death Guard Legion into treachery, told through the eyes of Captain Nathaniel Garro, a staunch loyalist, who leads a ragtag group of survivors in escape, taking word of Horus’ betrayal to Holy Terra. A thrilling instalment, and Swallow would later pen a series of Garro short stories, gathered together and expanded upon in a single volume (see below). 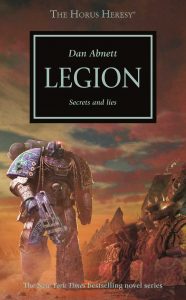 Legion by Dan Abnett, one of his finest Horus Heresy novels.

Legion by Dan Abnett (2008) Taking one of the more mysterious space marine legions (the Alpha Legion), and using that inherent mystery to weave an absorbing tale of espionage and clandestine plans-within-plans, Abnett produced one of his most innovative books. Quite unlike anything else in the series, capturing a heightened, atmospheric tale of a legion of cold, calculating warriors. Abnett introduced here the Cabal, a coalition of alien forces intent on preventing the success of the Chaos gods and their plans for domination. The Cabal’s foremost agent, John Grammaticus, an altered human, seeks to carry out the coalition’s agenda and he adds a fascinating angle to the story. Abnett also dropped a twist-bomb in his revelation about the Alpha Legion’s primarch, Alpharius. Abnett would go on to explore the Cabal’s influence in his impressive Horus Heresy novels, Know No Fear, and The Unremembered Empire, as well as a number of related short stories.

Garro by James Swallow (2017) Gathering together all of Nathaniel Garro’s tales in one volume and expanding upon them, author Swallow has created a character driven sequence of stories that are varied as they are thrilling, ranging from out-and-out action yarns, to covert intrigue in the shadowy corners of the Imperium. Reviewed here by our editor Andy Jamieson.

Notable mentions: there are so many other talented authors currently plying their trade for the Black Library, that this above list of titles is by no means definitive, and is by extension meant only to give an indication of some of the standout releases according to the tastes of the Geekzine team. Over the course of twenty years, many authors have plied their trade for the Black Library. The likes of William King, Nathan Long, David Guymer, Andy Hoare, Aaron Dembski-Bowden, Guy Haley, David Annandale, Andy Smillie, Nick Horth, Laurie Golding, CL Werner, Andy Clark and Nick Kyme, amongst many others, have produced, and are continuing to produce, a great range of exciting stories set within the Warhammer 40k universe and the Warhammer Age of Sigmar Mortal Realms.