Friday 20th  September marks the release of the game Ni No Kuni: Wrath of the White Witch on the PlayStation 4 (as a remastered edition) and Nintendo Switch. Originally a PlayStation 3 title, Ni No Kuni was a popular hit in the West back in 2013, and spawned an excellent sequel (Ni No Kuni 2: Revenant Kingdom) that landed on the PS4 in March 2018.

So what, asks the doubter. Well, Ni No Kuni is not just another Japanese RPG series, or just another videogame. What sets this series apart is the pure quality of the games, the creativity of craft and design, the gripping story, and perfectly pitched difficulty level. The story of Ni No Kuni’s creation begins way back in 2008. 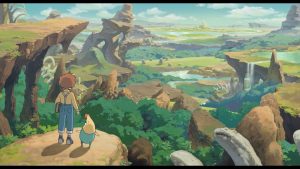 The gorgeous anime style of Ni No Kuni, designed and created by Studio Ghibli & Level-5

Produced by company Level-5 (best known here in the West for their series of Professor Layton games), their president Akihiro Hino was also the creator of Ni No Kuni. He made such an impression with his enthusiasm on Ghibli president Toshio Suzuki, that a deal was struck to co-produce Ni No Kuni. Yoshiyuki Momose of Studio Ghibli (a veteran artist of such classics as Spirited Away, Porco Rosso, and Grave of the Fireflies) acted as director and lead designer for the characters and animated sequences, he and his team fresh off Miyazaki’s Ponyo.

Joe Hisaishi, the renowned composer and longtime Ghibli collaborator, produced the soundtracks for all the titles in the series, and features some of his finest work, particularly in Ni No Kuni 2.

The first game, Ni No Kuni: Dominion of the Dark Djinn was released for the Nintendo DS in December 2010, alongside a mobile game, Ni No Kuni: Hotroit Stories (both are only available in Japan at present; a translated patch is available for download on the DS). The PS3 version, renamed Ni No Kuni: Wrath of the White Witch, and incorporating elements of both previous games, was released in November 2011 in Japan, and January 2013 in the West. Another mobile game spin-off, Ni No Kuni: Daibouken Monsters, came out in May 2012. 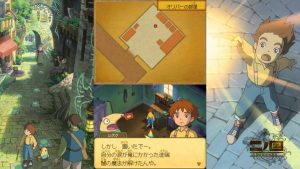 Ni No Kuni in its original iteration, on the Nintendo DS back in 2010.

The Ni No Kuni games are pitched for a ‘Young Adult’ and upwards audience, and as such are suitable for younger children with adult supervision (the first game features a hard-hitting bereavement early on). I came to Ni No Kuni quite late, first playing it in 2017. When I loaded it up on my PS3, the appeal for my two children (who at the time were 4 and 7) was the anime style, familiar to them due to their exposure to the various works of Studio Ghibli; I’m a huge fan of their films, and have by parental osmosis passed this fandom onto my kids. But crucially it was the accessible pick-up-and-play appeal of the game that grabbed them. Here was a game that drew you gently into its tale, with a story containing enough intrigue and mystery to capture young imaginations. The hero Oliver is a 13 year old boy who, after suffering a personal tragedy early in the game, comes to learn that he is destined for greater things… in another realm. Mentored by his guide, the fairy Mr Drippy, who provides frequent humourous interludes, voiced with manic Welsh abandon by actor Steffan Rhodri, Oliver embarks on a quest in the realm of Ni No Kuni.

Ni No Kuni: Hotroit Stories, a mobile only version released alongside the DS game. 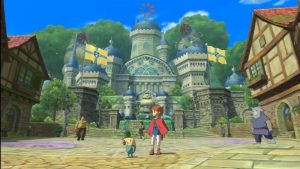 The set-up and structure of Ni No Kuni: Wrath of the White Witch is fairly traditional. Oliver and Mr Drippy navigate a lush, free-roaming open world, moving from settlement to settlement, gathering quests (and allies) along the way. Those quests usually revolve around conquering a dungeon and its ‘boss’; experience points are rewarded, levelling up our heroes, making them powerful, leading to them tackling harder tasks and challenges. Oliver is a wizard in training, so starts off with very few spells. With each quest and mini-quest completed, he learns more spells and becomes a better wizard. Gold earned through defeating enemies allows Oliver and his companions to buy better weapons, items, armour and so on. Again, it is the design that elevates the game, with its ingenious puzzles and tasks that add variety to the dungeon exploring and combat. The plot requires Oliver to travel between the realms, carrying out quests in his home town of Motorville as well as in the magical world of Ni No Kuni. The ease of play is compulsive, but this is no easy game; some dungeons take repeated play to conquer. There is an expertly pitched balance of challenge and reward throughout the game. We’ve clocked up over 100 hours of gaming over two years, and there are still plenty of mini-games left to complete. 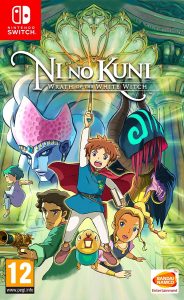 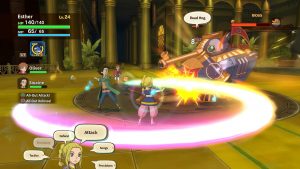 Ni No Kuni, remastered for the PS4.

When I informed my kids (now 6 and 9) that Ni No Kuni: Wrath of the White Witch was being released for the Nintendo Switch and the PlayStation 4, they were excited, regardless of the fact this is a game we have played lots. We have both gaming systems and, despite having completed the game previously, we are considering getting the new re-release. But on Switch or PS4? My kids said that the Switch version appeals to them more due to the handheld option. Depending on what the PS4 remastered edition has to offer, we might end up getting both…

Ni No Kuni: Wrath of the White Witch for the PlayStation 4 and the Nintendo Switch is available to pre-order from GAME, amongst other retailers, and will be released on Friday 20th September.

An animated feature film of Ni No Kuni was released in Japan towards the end of August.