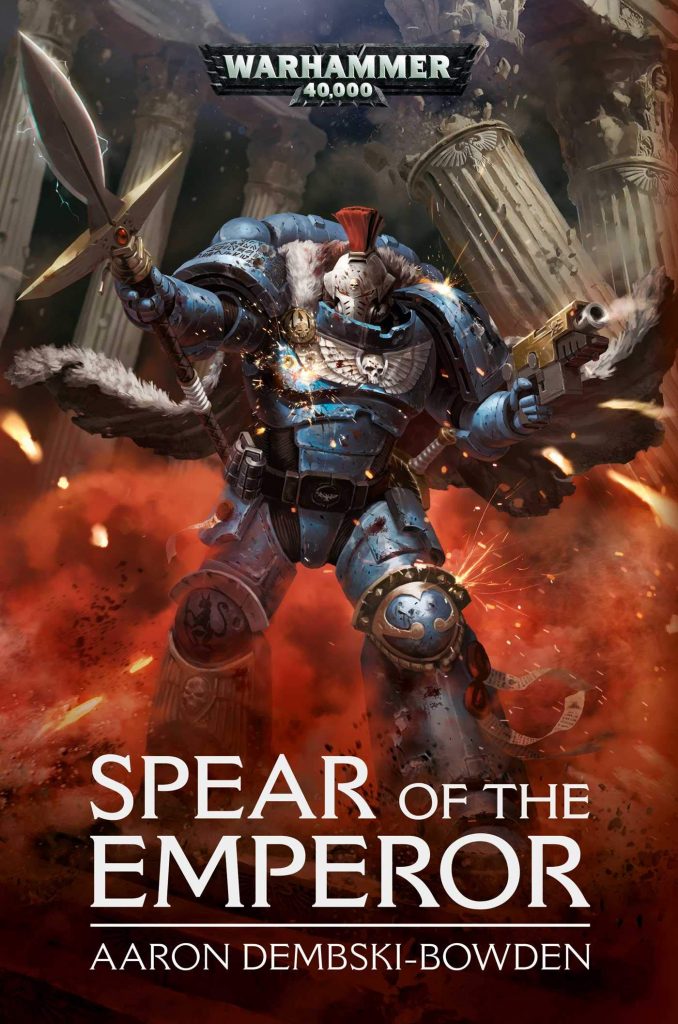 I’ve been reading Space Marine novels for approximately sixteen years now, and there have been some truly great ones. A cursory pick of the best includes Brothers of the Snake by Dan Abnett, Angels of Darkness by Gav Thorpe, and Storm of Iron by Graham McNeill. All very different, all featuring the Adeptus Astartes of the Warhammer 40k universe. Aaron Dembski-Boden’s latest novel, Spear of the Emperor, I feel belongs to that halcyon list.

The Space Marines of this novel are a chapter called The Emperor’s Spears, who are based in a far flung corner of the galaxy, Elara’s Veil, cut off from the wider Imperium of Man by the Cicatrix Maledictum aka the Great Rift (that being the most recent seismic plot development in the 40k sandbox). ADB weaves a gripping tale of these isolated warriors, told from the viewpoint of Anuradha, a human female serf of the Mentors Legion Space Marine chapter. She is part of a small contingent from that chapter, commanded by her master, Lieutenant Amadeus. Having survived the warp travel through the Great Rift, he has been tasked with assessing the Emperor’s Spears, due to their isolation and diminished numbers.

The Emperor’s Spears chapter are part of an alliance known as the Adeptus Vaelerii, or Defenders of the Veil, alongside two other Space Marine chapters – the Star Scorpions, and the Celestial Lions. Unfortunately both of these latter two chapters have been plagued by misfortune. In the case of the Star Scorpions, the entire chapter is missing in action, their fleet of ships last seen entering the warp. The Celestial Lions exist with depleted numbers, having been ravaged by numerous campaigns, including an unfortunate tangle with the Imperial Inquisition – which, if you know your Black Library 40k background, never ends well. To add more fire to the pyre, the Mentor Legion Space Marines wear the green and white livery of the Star Scorpions, having been assigned their chapter number and uniform when the Scorpions were declared lost. This creates instant tension between Amadeus and his hosts, the Emperor’s Spears, who see only provocation and trickery in the lieutenant’s arrival. Through Anuradha’s narration, the reader glimpses the cultural contrast between the uptight, regimented Mentor Legion officer, and the tribal, almost feral homeworld of the Emperor’s Spears. This state of tension powers the novel and lends the story its gripping quality. And just when I thought I had clocked where the story was heading, ADB threw a narrative spanner right into the mix, making the last third of the novel a page-turning whirlwind.

Aaron Dembski-Boden is one of the brightest stars of the Black Library, Games Workshop’s burgeoning publishing arm, and his latest is a perfectly crafted read. The pace of the novel is a feat of literary engineering at its finest, as each plot reveal raised the stakes, with each mystery, twist or revelation always satisfying and often surprising.

If you were one of the geekish superfan horde that bought one of the 1500 limited edition collector’s copies of Spear of the Emperor, you will have no doubt delighted upon the slender hardback ‘Index Astartes: Emperor’s Spears’. The ringbound, illustrated tome is a guide to the Emperor’s Spears chapter, including their history, livery, tactics and military hierarchy (they differ significantly form the more Codex aligned chapters). Beautifully illustrated by Marta Dettlaff, Kai Lim, Vladimir Krisetskiy, and Marc Lee, this additional book is worth every penny; it’s awesome. Also included in the collector’s set were an array of items so that the reader could, if they so chose, recreate the Emperor’s Spears on the tabletop; strategem card, objective marker and a sheet of transfers were all included. If you are determined to track down this edition, on eBay for example, be prepared to pay in the region of £250 and upwards. And no, I’m not selling mine!

The Emperor’s Spears are a welcome addition to the Space Marine family and wherever Aaron Dembski-Boden takes them next, sign me up.

Spear of the Emperor is on general release Saturday 14th December, published by the Black Library.