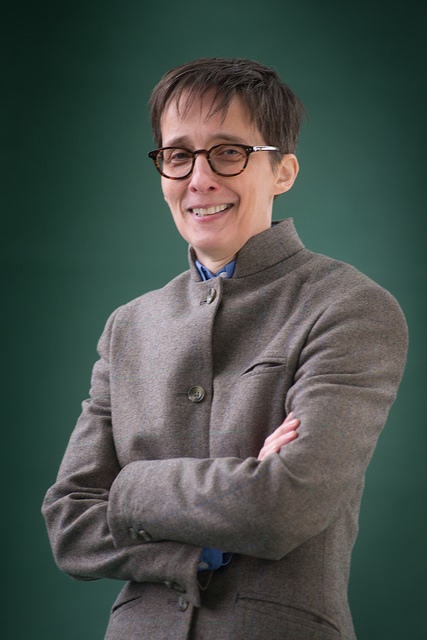 A darling of the Scottish literary scene whose best-known work concerns alcoholism and doomed love affairs, A. L. Kennedy might not appear the most likely candidate to pen BBC Books’ latest Doctor Who novel, The Drosten’s Curse.  But as Kennedy herself said during a wryly humorous talk at this year’s Edinburgh International Book Festival, it simply represents the latest step in her altogether unpredictable career, and one that she found challenging in new ways.

Kennedy’s reading from The Drosten’s Curse revealed (amongst the carnivorous monsters and sinister hotels) a Douglas Adams-esque humour embedded in the prose, presumably not an accident given her fondness for the Tom Baker era during which Adams served as writer and script editor.  Indeed, the book features the 4th Doctor as played by Baker, an emulation which Kennedy admitted was “a little bit exhausting” to maintain.  The novel was challenging in other ways, too; writing about “goodness” was, she said, rather strange for her, and although the people at the BBC were lovely to work with, there was always a feeling that the corporation was keeping a close eye on any author working with their characters.

Kennedy was insistent that The Drosten’s Curse should be considered a children’s book, albeit one that will bring a touch of nostalgic joy to adults of a certain age.  The story is, she said, very much informed by her younger self’s memories of and frustrations with the television show as it existed in the 1970s, and writing in an emphatically science fictional context also gave her a chance to play with the genre’s capacity for political subtext, rendered subtly but simply enough for children to understand.  While she’s not sure that she’d ever write a ‘franchise’ book again, Kennedy said that, whilst writing the novel, she was continually surprised by the sheer fun of it all.