Both streamed via Amazon Prime Video 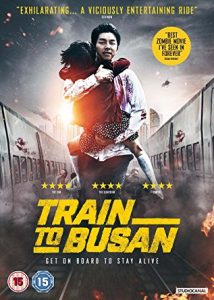 Train to Busan achieved some acclaim last summer with its largely positive reviews and decent box office (look out for the inevitable Hollywood remake…). It’s been on my radar for a while now and landed on Amazon Prime Video this summer. It does not disappoint. A Korean zombie thriller is not something you come across everyday, and Train to Busan, once seen is not forgotten. For a zombie film to stand out amongst the competitive and overcrowded genre market it has to have something extra special about it. The train setting, whilst not massively original, gives this film its narrative shape, and also adds that key ‘crucible effect’; ie contain your action to a limited space, introduce an incident to your characters, and watch the sparks fly. The film’s script is also laced with a sly social commentary, some of it specific to South Korea, but most of it a not-too-thinly-veiled stab at capitalism, linked to the film’s main character, businessman, Seok-woo. The zombie plague in Train to Busan takes hold of its victims in mere minutes (similar to Zach Snyder’s Dawn of the Dead remake, and 28 Days Later, amongst many others), and the infection, depicted with simple yet grotesque make-up effects, rips through the train’s passengers in minimal screen time. How the survivors initially halt the onrushing living dead is fiendishly simple; one of them figures out that the infected can’t figure out how to open the train’s sliding compartment doors, and this buys our band of panicking heroes valuable time. Director (and co-writer) Yeon Sang-Ho has created a film that relentlessly layers set-pieces of high stakes tension one after another, but never loses sight of his characters, or plot. After all, the train has to stop at some point. The emotional core of the film is the father-daughter pairing of, respectively, Seok-woo (played by Korean heart-throb, Gong Yoo) and Soo-ann (played with an endearing balance of cuteness and steely resilience by Kim Su-an). The last act is riveting.

Seoul Station is the animated prequel to Train to Busan, and is also again directed and co-written by Yeon Sang-Ho. Rather than the Japanese anime style I 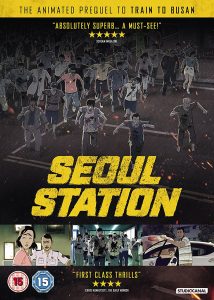 was expecting, Seoul Station is far more realistic in its visuals, with great attention paid to the intricacies of character detail. Depicting the break out of the plague in Seoul, the story follows put-upon and abused Hye-sun as she flees her pimp/boyfriend, only to get caught up in the epidemic. The animation is crisp and fluid, and the story has a different sense of urgency to Train to Busan, given its cityscape setting, that brings to mind the second Resident Evil film (Seoul Station is lots better, of course) or The Walking Dead’s urban scenes. Seoul Station doesn’t match Train to Busan in the tension-cranking stakes, but it does also provide more edged social commentary, with Hye-sun’s experience of being prostituted against her will, manipulated throughout by her boyfriend, all giving her character some very tangible depth and a suggestion that this fiction is merely a lid for a darker truth in society. The film-makers also give us a glimpse of Seoul’s homeless scene, and the poverty that they live in, all under the shadow of neon-lit skyscrapers. From these grim corners, Seoul Station produces some strong characters, particularly the exploited Hye-sun. However, collectively they lack something compared to the father-daughter dynamic in Train to Busan. I’m nitpicking, of course. The two films succeed in complimenting each other, and make for a satisfying, edge-of-your-seat double-bill.

Both Train to Busan and Seoul Station are also available to buy on dvd and blu-ray.