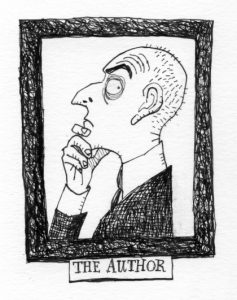 Self-portrait of the author/artist

Author Chris Priestley’s latest book, Curse of the Werewolf Boy, is out now, published by Bloomsbury for £6.99. I’ve been reading his books for over ten years, and he is surely one of the finest craftsmen I’ve come across, combining the rare talents of storytelling and writing to produce one memorable read after another. His Tales of Terror trilogy, also published by Bloomsbury, are a sequence of incredible books, portmanteau horror tales weaved together with admirable skill and flair. Every Christmas I read Dead of Winter, which is personally my favourite of his books.

Curse of the Werwolf Boy is aimed at slighter younger readers than his usual fare, and again is a wonderfully engrossing book. Blending gentle comedy and horror in tasteful measures is no easy thing to do, but Priestley has written a page-turning spooky read, which is also the first book in the Maudlin Towers series. Chris took time out from his busy schedule to answer some questions. Enjoy. 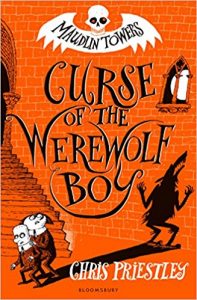 Andrew Jamieson: Your new book, Curse of the Werewolf Boy, is the first in a new series, Maudlin Towers. What were the challenges involved in firstly, coming up with the idea for a new series, and secondly, planning the first book?

Chris Priestley: It’s been a while since I’ve done a series – a proper series with repeating characters. I think the goal is to give yourself enough options with the initial set-up. To make sure your main characters are engaging enough and then make sure they have an environment that will throw up lots of interesting adventures for them. I actually found the process pretty stressful. Not the writing of the book – but the designing of the world and how I would present it. I really wanted to do it justice. Book 2 will be so much easier, now that the template is in place.

AJ: Do you have plans already in place for future books in the Maudlin Towers series, and can you reveal any details of what you have in store for your characters?

CP: I’m editing the 2nd draft of Maudlin Towers 2 at the moment and already thinking of illustrations. Book 2 is called The Treasure of the Golden Skull (or it is at the moment anyway). I don’t want to give too much away obviously, but pirates are most definitely involved. Arrr.

AJ: As well as being a prolific writer, you are also a very active artist. How much does one creative process infuse the other, and does this influence the creation and planning of future projects?

CP: Well, I was trained as an illustrator and the two things have always gone together in my mind – I just have not always been successful at making that a thing in my career. I’m hoping to address that. I have illustrated all of my recent books and I see that continuing now that illustration has made a comeback across all age groups (except adult – but give it time). My plan in the next few years is to do more work where my writing and my illustration work are given equal billing. I’ve yet to do a picture book for instance. Or a graphic novel. I’m excited about the possibilities.

AJ: Will you return to the Tales of Terror series at some point, or do you see that sequence of books as being complete?

CP: I must get asked this at least once every week. I would very happily have carried on with the Tales of Terror series but I am not self-published and so the decision is not mine alone. But regardless of whether I do books called ‘Tales of Terror’ again – I will definitely be doing more work in that vein if I have anything to do with it. I like writing short stories. They come very naturally to me. I still have a lot of strange tales in my head. It’s probably better for everyone if I get them out. 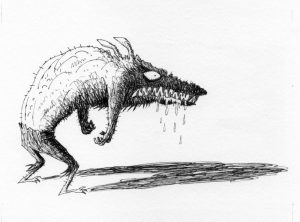 AJ: What other projects do you currently have in the works?

CP: Maudlin Towers has kind of taken over my life recently, but I want to do a picture book, that’s for sure. It’s just a question of coming up with a suitable idea. I would like to do something with the kind of fables I have Frank’s grandfather telling him in Anything That Isn’t This. That is another form that seems a very natural voice for me. I’d quite like to do more funny stuff as I’ve really enjoyed that aspect of writing Maudlin Towers. Oh – and something for adults. Short stories, maybe.

AJ: Are there any ambitions you still have as a writer and/or artist?

CP: I think my main ambition is to do good work and be properly rewarded for it. Like just about every other creative person out there.

AJ: What are you currently reading for pleasure and/or for research purposes?

CP: Chris Riddell sent me a copy of Travels with my Sketchbook and I’ve been boggling at the amount of work he managed to crank out in the two years he was Children’s Laureate. He makes me feel a bit lazy. I’m dipping in and out of Judith Flanders book The Victorian House, which I recommend to anyone who writes or reads things set in that period. I’m also reading The Mercurial Emperor by Peter Marshall – although very slowly – about magic in Renaissance Prague. My next fiction book will be another Richard Yates. I’m working my way through all of his books. He is absolutely brilliant.

Thank you to Chris for taking the time to answer the Geekzine’s questions. Curse of the Werewolf Boy is OUT NOW. Andrew reviewed it last week.